We hiked back to the Bus Hostel Sunday morning to pick our rental car from Route 1 rental. Worked out to be about $70 USD a day for a Toyota Yaris. Most of the rental cars are manual so if you can't drive stick, you have to hunt for one. Thankfully Josh could drive one. 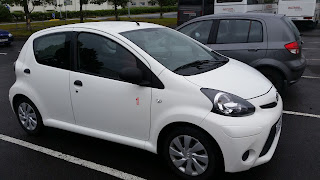 We decided to were going to drive to see one of Iceland's most iconic waterfalls, Gullfoss, via the Golden Circle. We stopped briefly at Thingvellir National Park on Rt36 to see the rift between the North American Plate and the Eurasia plate. As with most of the trip, it started to pour as we got out and tried to get some good pictures. 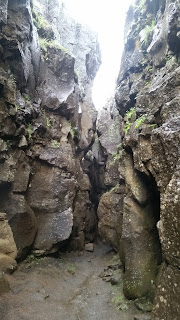 We stopped at Geysir next and caught the geyser erupting as we were walking up. We didn't have much interest in hanging out to watch it closer, so we turned around to head towards Gullfoss.

Gullfoss was pretty neat. It's right off the road and has a lower and upper overlook with two different areas to park. It wasn't as big as I thought it was going to be. It reminded me of the size of Great Falls(in the DC area), just prettier. 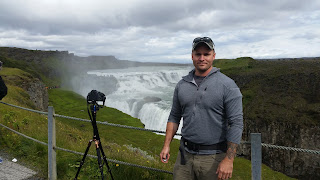 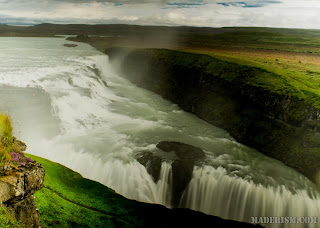 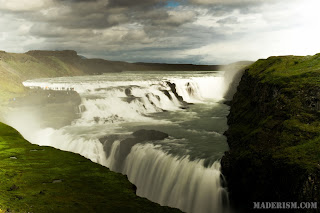 From there we went headed towards Vik to see the black beaches and stay for the night. We stopped at Selfoss for a few so I could grab some pictures of a church I had seen on our failed trip to Landmannalaugar. It's one of the largest towns in the southern area that we came across. 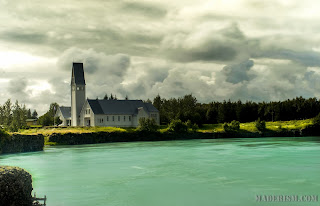 Once we got closer to Skógafoss on the Ring Road(Rt 1), the mountains began to pop up and it was amazing. It was a neat combination of olive drab and dark grey with waterfalls sprinkling the sides along the way(most of Iceland that we saw was green and grey). We scouted a bunch of things we wanted to see on the way back to Reykjavik.

We stayed at the Hostel Vík. We thankfully made a reservation the day before. There were a few groups that showed up trying to get a room and they were full. It was a pretty nice view from the hostel.

After unpacking, we wandered into downtown Vik to check out the black sand beach. 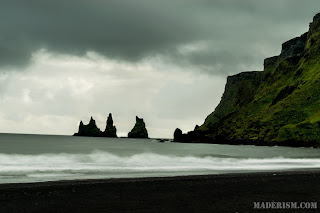 We decided to head to the other side of Vik and check out the Reynisdrangar stacks closer in a small village called Reynisfjara. The Hálsanefshellir cave is also located here. 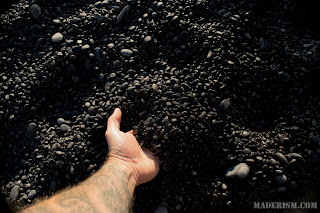 We had dinner at the Black Beach Restaurant before deciding to walk down the beach towards Dyrhólaey peninsula to see the arches. We came across a tent set up on the beach in the dunes. There aren't any rangers or posted signs so it appears you can probably set up and camp wherever you want, though I'm sure it's frowned upon by someone, maybe.

As we got closer to the peninsula high tide came in and it blocked our access. It didn't appear to have any easy access up the cliff to the top anyhow. We turned around and headed back to Vik for the night. We tried to hit up the bar behind the hostel, but it just closed as we walked up to it (10pm)

See All the Things

We awoke to the sound of the fire alarm going off in the morning and the odor of breakfast being made. It made an effective alarm clock.

We set out to drive to Dyrhólaey before the tour buses started to arrive. It was sunny and beautiful with no chance of rain. Finally.

We followed one bus up, but they stopped at a lower parking lot and made their passengers hike up. We drove to the top where there was a small parking area. I had just finished up taking some pictures as the crowds began to swarm. 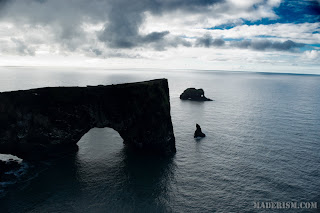 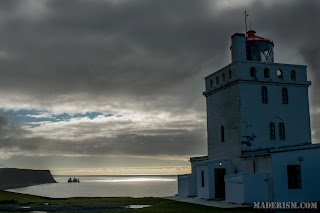 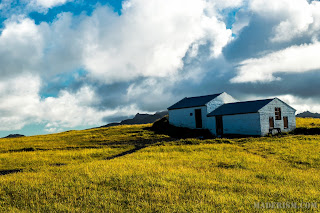 We went off to search for the Navy plane wreckage next.

We missed the turn and had to turn around before driving down the rocky road. You don't need a 4x4, but a higher clearance car is probably recommended. We bottomed out a few times driving and had to straddle the edge of a rut to keep high enough. There was only two other cars there when we pulled up. A gentleman who was getting ready to leave said he came across a guy that was camping in the wreckage when he got there. He packed up and kept hiking down the coast. Pretty neat spot! 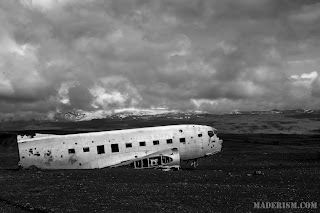 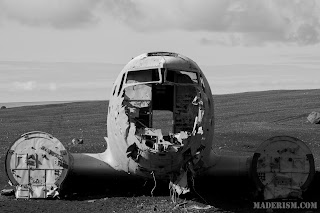 The waitress at Taco Barin told us the locals version of what happened to the plane: The plane was loaded with some Top Secret files and took off from Reykjavik towards Europe. It was overloaded and struggled maintaining altitude and saw a large swatch of flat black beach and landed safely with no injuries. They were ordered to stay on the plane and not to leave, under any circumstances. Some local farmers saw the crash and went to help. The Navy crew told them they weren't leaving until the Navy came to unload the plane. The farmers told them they were silly because they landed on the beach at low tide and it was about to come back in and they would probably drown. The farmers left and came back with their tractors and ropes. They rigged up the plane and dragged it further up the shore towards the sand dunes, saving the plane and the crew. After it was stripped down, the Navy left it there and the locals used it for target practice, thus the bullet holes.

Next stop was the glacier known as Sólheimajökull. We eyed it driving back and forth on Rt 1 and found a gravel road that went towards it when we turned around after missing the turn for the plane. It was an easy ride up to the end of the road to the glacier. We had breakfast and delicious coffee at the Café Sólheimajökull before a short, easy walk to the ever receding edge of the glacier. The outfitter attached to the cafe does ice climbing and jeep tours of the glaciers as well. 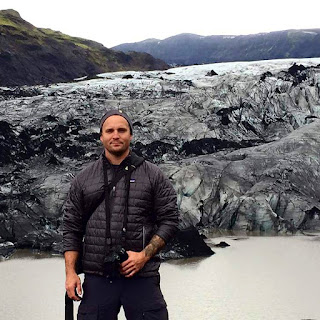 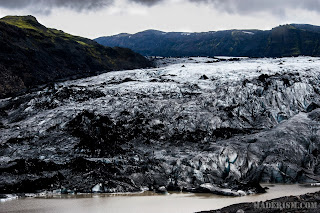 Skógafoss and the Fimmvörðuháls Trail

We rolled into Skógar around 10 am. There are a few restaurants, info centers and a hotel there. After taking the some pictures, we geared up and started off for a day hike. 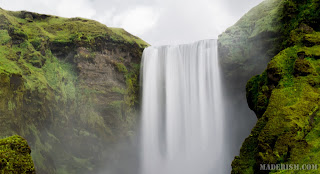 The Fimmvörðuháls Trail goes from Skógar to Þórsmörk (Thorsmork) and connects you to the Laugavegur hiking trail. It's about 18 miles long. We were going to hike to the Balduinsskali/Fimmvorduhal Huts and come back, which are about half way between the two villages.

We hiked along the Skóga river and encountered waterfall after water fall. I think we counted about 20 along the way 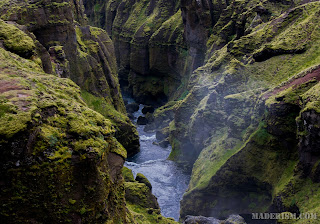 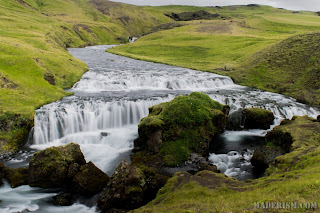 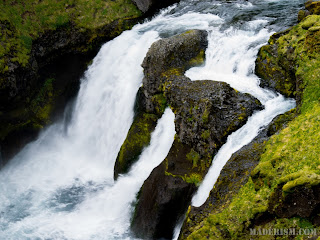 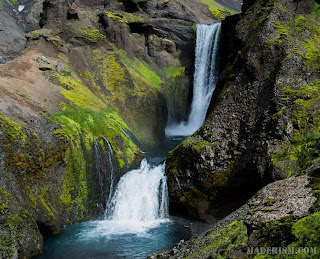 We stopped and had lunch at the point where the trail veers away from the river and heads towards the huts. 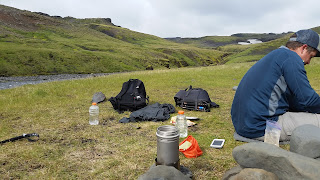 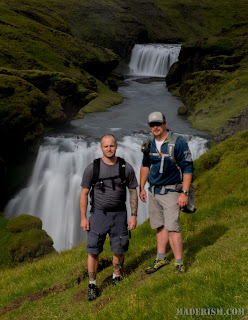 We decided that we were both very content with what we had seen and decided to head back down to Skógafoss to explore the area some more and find some more beer.

We set up camp in an open field near the base of the falls and drove off on Rt 1. to see what else was in the area. 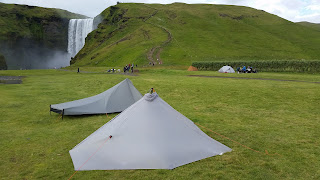 We drove down towards Gljúfrafoss and stopped along the way. 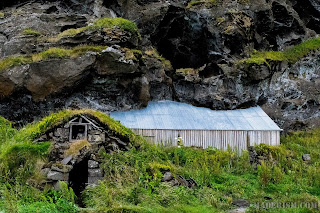 It was getting late so we went back and ate at the Hótel Skógafoss Bistro Bar. They had a vegetarian dish as well as fish and meat and more importantly, beer we hadn't tried yet. The iceberg lettuce salad was brown, but the mushroom pasta was awesome.

It was a clear night and I hoped to catch some good star gazing and maybe try some night photography. Between 1-2am is the darkest during the middle of August, but it was still pretty light out at 130am. The winds started to pick up around 4am and it started to rain again shortly after that. We broke down camp and headed back to Reykjavik early Tuesday morning.

We made it back into town a little before 10. We had breakfast/lunch at the Taco Barrin  and chatted with the waitress again for a bit (where she told us the Navy plane story) and finally back to the Bus Hostel to unpack, shower and nap. We checked out the fire station next to the hostel and chatted with some of the fire and SAR guys there for a bit(Josh and I are both career firefighters).

We had dinner at the Bjór Garðurinn(Beer Garden) a German style restaurant/bar attached to a hotel. They are known for their sausages(meat and vegan) and awesome beer selection. 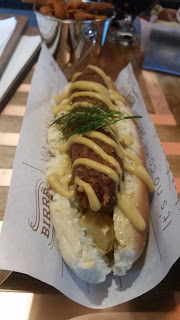 The grilled cheese was pretty badass. 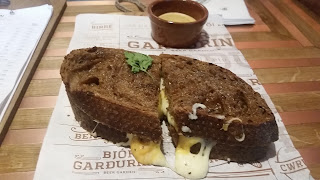 As we were getting ready to roll out, a jazz trio showed up and we wound up staying longer and getting hammered(pints of 10% La Trappe Quadrupel-oof). 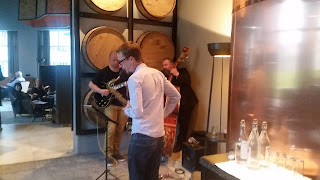 We hopped to a few more bars and stumbled back to the hostel.

We had rented a 4 bed room and we had one other guest with us that we hadn't seen yet. He came in around 2 am. I was awoken to him saying "Are you fucking serious?!?" in response to Josh's snoring. I tried to tell him it's rhythmic like the ocean and he'll get used to it(not!). He wasn't having it and rolled out to sleep downstairs. I woke up with a nice headache.

We drove downtown to find food(pretty good fish and chips at Reykjavik Fish) and a liquor store to try to bring back some good beer($30USD for a six pack!).

We drove to Keflavik Airport and dropped off the car and hung out, waiting for the flight. It was about 6 hours to get back to BWI. It took us about 1 hour to get through Immigration at BWI. They only had two booths open to process a few hundred people from various flights. Good times.

All in all is was an amazing trip.

The locals are generally very friendly and helpful.

They speak Icelandic, English and Dutch(from what we were told, the older people don't really speak English much)

We only saw 4 cops the whole time. We were told they are very hands off unless you do something very stupid. Likewish, there are no park rangers, just workers who run the huts.

It reminded me very much of the Ballard area of Seattle in terms of architecture and weather(Ballard has a heavy Nordic influence). It rained often, but for short periods of time.

Go to a bank to exchange currency

Use a VPN when using WiFi. I had forgotten to use mine in a few spots and the Skype on my tablet was compromised. It started sending off malicious links to my contact list. I use TorGuard.