Wow Airlines had a pretty good sale on flights to  Iceland back in January and I recently read about the Laugavegurinn trail in Backpacker and decided that would make a pretty awesome trip. I bought my ticket and started asking friends to see who wanted to go with me.

My buddy Josh, who I backpacked the Teton Crest Trail with in September '14, stepped up and eventually my friend Kristin said she wanted to go as well. I spent months researching and planning and Kristin and I worked on a Google Map of places to see to come up with a game plan.

I originally wanted to rent a car and drive the Ring Road in a few days, but it appeared most of the sites we wanted to visit were on the south and west side of the country so we decided to just meander around those areas.

All packed up and amped to go, Kristin had to unfortunately cancel at the last moment so it was just Josh and myself. He picked me up and we were off to BWI. 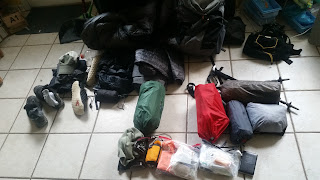 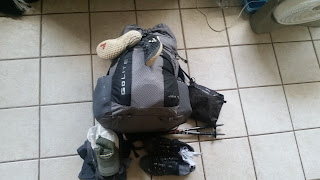 After we parked, we had the first of many beers on the trip and we were off. 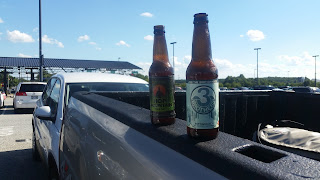 Wow Airlines is a newer and smaller airline company. They are a budget version of Virgin. The planes are new and the crew was very stylish. Since they are budget, you had to pay for everything. We were supposed to take off at 7:25pm, but didn't wind up taking off until sometime after 8. Some loud guy wound up getting moved into Kristin's seat, which was across the isle from me. He blabbered ALL night to his neighbor and I forgot my earplugs, so sleep was minimal.

Somewhere over Greenland, the Captain got on the PA and announced that the Northern Lights were visible on our side of the plane and sure enough, we were flying right next to them. The sky was full of the beautiful green lights for about 10 minutes.  About an hour left in the 5 hour flight, The Talker finally went to sleep. By then I wasn't able to go to sleep.

We landed a little after 6am, about an hour behind schedule . Getting through Immigration and Customs was a breeze and we picked up a Flybus from Reykjavik Bus Excursions (free WiFi). It cost about $15USD or 1,950 ISK which we paid for before we left. It was about 50* and a little rainy on our 45 minute trip from Keflavik to Reykjavik. It dropped us off at the BSI bus terminal downtown.

Our plan was to get in town, drop off our gear and pick up a bus to Landmannalaugar and start hiking.

We took a short walk to the Bus Hostel, which was almost visible from the terminal. We had two reservations there for when we got off the trail and our last night in town. They were happy to store our luggage for us while we were on the trail. We got there about 7:45. It appeared we were going to miss our 8am bus to Landmannalaugar, so we took our time and got our gear squared away and planned to jump on the 1pm bus.

Trex has a shuttle that runs from various stops in Reykjavik to Landmannalaugar and Thorsmork. You can get a Hiker's Pass that allows you to get there and back at your leisure for about $95USD or 12,300ISK. The stop closest to the Bus Hostel is at the Shell Gas Station off of Miklabraut(Rt 49) in front of the Kringlan shopping center.

After scoping out the shopping center(everything opens at 10am) we walked down to the Hilton and had breakfast & sat around stealing WiFi for a while, waiting for the bus.

Reykjavik and ride to the Landmannalaugar/basecamp

We walked back to the Shell station and it started to rain and got pretty windy. Typical weather we've been told. The bus finally came and on schedule. Since this was the last of two shuttles to Landmannalaugar, it was pretty empty. 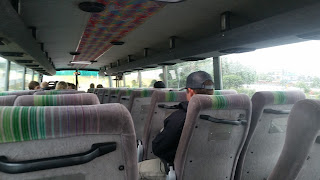 It's a 4 hour ride to Landmannalaugar with a few stops on the way. There are no bathrooms on the bus and it stops once at Hvolsvöllur for a very quick break. Most of the restrooms aka water closets (WC) ask for a $100 or $200 ISK donation($.75-1.50USD). There's a small deli in the glass building next to the gas station that has bakery items and sandwiches(ham, salmon and veggie). Get some donuts! Absolutely the best we've ever had.

After leaving the main road, we got on a looong gravel/dirt road to Landmannalaugar. It's very bumpy and several stream crossings. 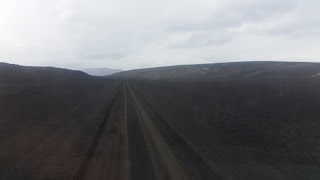 Once we pulled into Landmannalaugar, we were met by a ranger who warned us that trail conditions were horrible and to see her for more information once we got off the bus. It was cold, super windy and raining and sleeting hard. 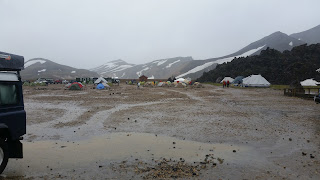 Once we found the information booth, the ranger told us that they had pretty much closed the trail down and we would be very stupid to attempt it unless we had ski goggles, a 4 season tent, crampons and GPS. She said they had icy blizzard and snow conditions at the Hrafntinnusker hut, which was our 7 mile destination for the night. They had their Search and Rescue team out on the trail making rescues.

After much debate and consultation, we decided to set up camp there and hope weather would clear in the morning and we would knock out a 20 mile day to the Emstrur/Botnar hut.

We tried to set up our tents. I had the SMD Gatewood Cape and Josh has the Tarptent Contrail. Neither could stand up to the onslaught of heavy winds we had(30 knots). 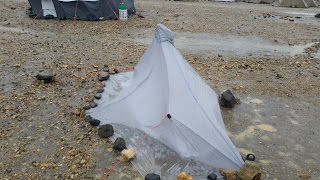 We decided to break down the tents and sleep in the shower house. Everyone seem to be huddled in there for shelter. 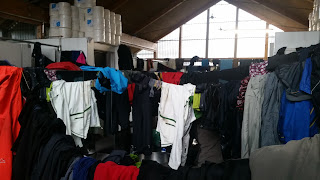 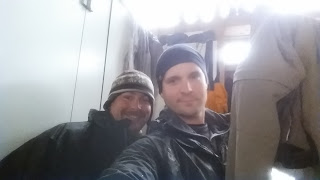 After checking the weather again, it didn't look like the weather was going to clear up until later the next day. There was a bus leaving at 8pm to head back to Reykjavik.  We very reluctantly, after much discussion, decided to head back to town and scrap the backpacking portion. The ranger called around and found us a room at the Salvation Army Guest House.

Ride Back and the Salvation Army

We packed a bus up with a large French group who also cancelled their trip early. We were a little cozy in the back of the bus with all their gear and eventually left after 9pm 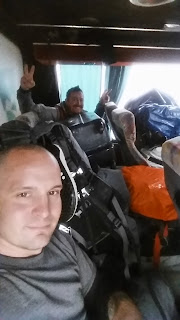 We had to stop somewhere along the way to change buses. We made it back to Reykjavik around 2am. We walked from the BSI bus terminal to the Guesthouse after getting directions. They were expecting us and after hanging out our wet gear, we crashed after 48 hours of no sleep.

The Salvation Army Guesthouse is right downtown and there are ton of shops and restaurants nearby. Breakfast isn't a big thing there so there are a few places open before 10am(a few open at 7). We wound up eating at the The Laundromat Cafe. Reykjavik is a pretty left leaning city. 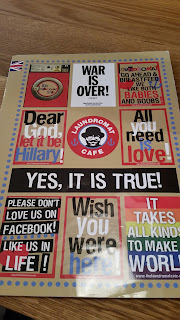 We spent the next two days wandering around the city and enjoyed a ton of mostly Icelandic beer. Some highlights:

Skólavörðustígur is one of the main shopping streets. They recently had their Pride Parade and had a big street festival that Saturday with a few food vendors, bands and bounces for kids. They had tried to get a massive water slide, but it was delayed getting there. 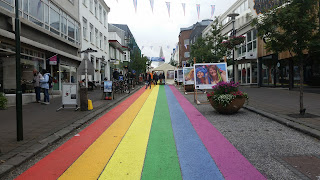 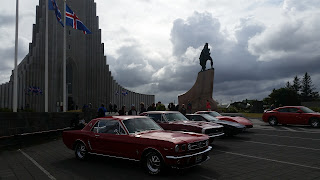 I'm a pescatarian and came across one of the only vegetarian restaurants in the city, Gardurinn. They do one dish with a few sides per day. 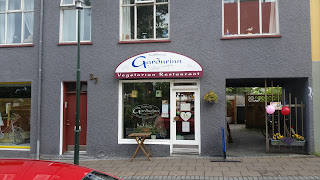 Dunkin Donuts just opened their first shop in Iceland a few weeks before in Reykjavik . The line stretched about a block. It should be noted, that in most restaurants and cafe's you only get one size cup of coffee. Dunkin has the larger sizes. Most of the coffee we had was strong and wonderful. 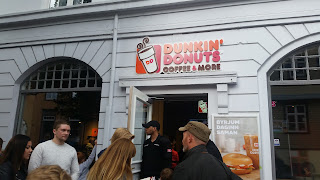 Taco Barinn is a small taco restaurant that just opened a few months ago by an American from LA and his Icelandic wife. The food was good and the wait staff is super friendly. We wound up eating here twice. 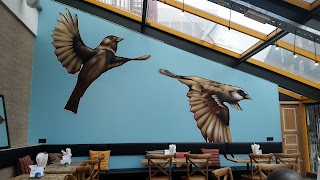 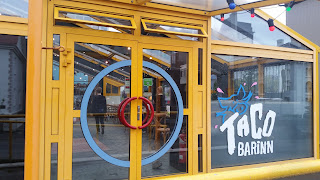 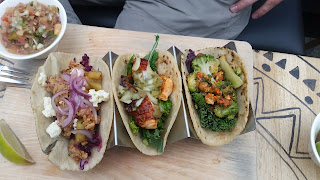 Micro Bar and Skuli Craft Bar are definitely great spots to go to for great beer. Both are downtown around the corner from each other and the Salvation Army Guesthouse. 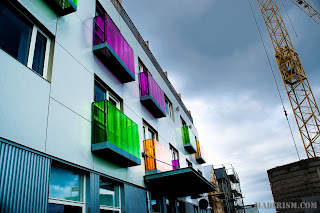 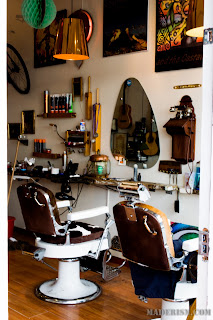 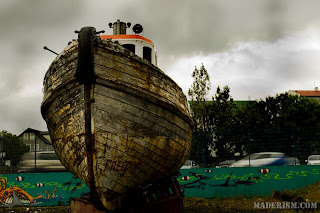 Since Saturday was our planned return day to the city, we were going to stay at the Bus Hostel. As we were waiting for our check-in, I caught an email from Kristin who said she was unable to cancel the apartment she rented for the night. Stay at the hostel or stay at an amazing apartment? Not a tough choice. The Rey Apartments are right at the heart of the shops we were hanging around at. It was a great little space to relax and stay in and made beer drinking that much easier.

The next morning we cooked breakfast, packed up, and got ready for the second half of our trip